What are edgeless monitors?

The vast majority of monitors, tablets and other screens of various devices are surrounded by a plastic frame, known as a bezel. Edgeless monitors are, in most cases, monitors with little or no bezel. These types of monitors offer more in terms of graphics quality and the screen size is fully maximized for a better display.

Already know about edgeless monitors? Jump to find your design:

Currently, most monitors that are considered edgeless are not fully “frameless”. This is because the bezel, or plastic frame, is still present but it is nearly invisible. Sometimes the plastic frame can be a mere 2mm wide, which, compared to standard monitors, is very thin.

Why monitors are normally not edgeless

Normally monitors are not edgeless and this is because of the fragile glass used. The frame in traditional monitors is, therefore, used to protect the glass in case of any accidents. Also, normal edged monitors are considered safer, especially if your job involves moving around with your computing equipment. That way, you can be sure that the risk of having a broken screen is reduced compared to when the monitor is edgeless or frameless.

But, the major reason monitors are normally not edgeless is because monitors with edges or frames potentially cost less to manufacture. Frameless monitors require stronger and more expensive materials.

What do edgeless monitors require from a tech perspective

Edgeless monitors are the way to go if you are looking to smarten up your workspace or you want a wider display screen. We believe you can enjoy this and more when you buy an edgeless monitor.

From a tech perspective, edgeless monitors require thinner bezels compared to the standard type of monitor. That way, manufacturers can maximize the display portion of the screen by minimizing the amount of plastic frame. Frameless monitors have similar requirements, in terms of materials, as traditionally framed screens. So, you can upgrade your 19-inch monitor to a 21-inch without having to make more room on your worktable.

With edgeless monitors becoming more popular with gamers and even general computer users, they’re also becoming more accessible. Manufacturers are beginning to find cheaper ways to build borderless and frameless screens which has led to many different types of bezel less designs.

To give you an idea, we’ve picked out our best edgeless monitor for 3 different categories. 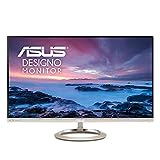 The 27-inch ASUS Designo MX27UC has been built with a bezel that’s just 0.1cm thick to give you more of the screen for the same space.

However, the main attraction is it’s 4K UHD resolution with dimensions of 3840 x 2160 to give you the ultimate viewing experience. Games, movies, and photographs have never looked as good.

If you’re looking for something that’s specifically for gaming then Sceptre’s 27-ich curved edgeless monitor has been well received by players. It has an average rating of 4.5 stars from customers and a price tag that won’t break the bank. Its bezel is certainly bigger than the other two on our list but is still a lot thinner than other screens.

The 1800R curved experience immerses you in the action, while there are also dedicated FPS and RTS settings to enhance the graphics even further. 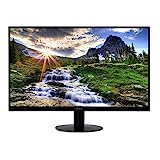 For an edgeless monitor on a budget, we’ve picked out the ASUS SB220Q which offers Full HD visuals across 21.5 inches and has a response time of 4ms.

It’s also been well received by customers for a 4.5-star rating and is perfect for casual gamers who don’t want to spend a significant chunk of their monthly wage.