Virtual reality has shaped the gaming world in many ways. VRChat is a good example of this. If you’ll be taking on a 3D avatar to interact with people in a virtual environment, you need to use the best VR headset for VRChat.

With good VR headsets for VRChat, the display is crisp and in high definition. In addition, you will clearly hear the quality sounds of all the actions in the virtual environment. This will give you an immersive experience, especially when playing MMO or high-intensity games.

Choosing a good VR headset is not just about the price. This is why we will be reviewing four of the best VRChat headsets on the market. This way, you will know all their features and what makes one better than another.

The Best VR Headset for VRChat

Oculus is among the biggest names in the Virtual Reality industry, and has several VR headsets for gaming. Oculus Rift S is one of the best you can find on the market, and it has several incredible features that will improve your gaming experience.

It offers a 1440 pixel resolution fast-switch LCD display, and the refresh rate is at 80Hz. As a result, you can expect nothing but crisp quality images and a high frames per second gives you a seamless experience as you play VRChat.

The headset comes with two second-generation Oculus Touch controllers, the same as the ones used in the Oculus Quest handset. It has built-in speakers, so you can use it without additional headphones. As for the size, it is 15.4 × 6.5 x 12.1 inches.

Apart from the good display, sound, and excellent controllers, Oculus Rift S also has great motion tracking. This means that you won’t experience lags in the display when moving your head while playing VRChat. This will add up to an overall great gaming experience.

Another incredible feature of the VR headset is that it is comfortable to use for long gaming sessions. While there are better headsets than the Oculus Rift S, they cost double or even triple the price, and the differences are marginal.

If you are looking for the best VR headset and ready to pay a premium price, the Valve Index may be the right choice. It stands out from most other headsets as it comes with two LCD panels at incredible display resolution.

Besides that, its refresh rate is up to 144Hz, so you can expect a mind-blowing, crisp quality display. Also, instead of using integrated headphones as most VR headsets do, Valve Index comes with speakers you can position off your ears for super quality audio.

Another impressive feature of the VR headset is that it uses Valve’s new knuckles controller. So, you don’t need to hold on to them to perform actions when playing games. The controllers have adjustable straps, so it fits just perfect.

The controllers come with sensors that detect the position of your fingers, so you can have a more realistic experience. Besides that, the fill factor of the VR headset display is three times better than OLED, which immensely reduces the screen door effect.

One noticeable drawback is that it does not support HDMI, neither does it work with HDMI adapters. The available ports include DisplayPort 1.2, USB 3.0 port, and 3.5 mm audio jack. As for the price, it’s a bit steep compared to regular VR headsets.

The Oculus Quest 2 is another good VR headset from Oculus that you can use for VRChat. It comes with an Android OS as well as a Snapdragon XR2 processor. This means that you can use it to play games without a PC tether.

A good thing about the VR headset is that it is wireless, but it has the option to tether to a PC if you choose to. There are two versions released by Oculus, one with 64GB storage and the other with 256GB storage.

Oculus Quest 2 has an LCD with a 1832×1920 resolution, which is 50% higher than the Oculus Quest 1. It’s an all-in-one device that is backward compatible and easy to set up. In addition, it comes with preloaded apps, but you can uninstall them.

The VR headset controllers are similar to that of the Oculus Quest 1 but with the introduction of the thumb rest feature. Each controller uses a non-rechargeable AA battery, and they have a hand tracking feature that is quite accurate.

As for the sound, it may not be the greatest. It uses small directed speakers but with good quality. However, the audio may feel too thin, especially if you are in a noisy environment. Nevertheless, it is a great VR headset and affordable.

The fourth entry into our list is the Samsung Odyssey.

This device has a 3K AMOLED 2880×1600 screen, a direct backlight with auto-precision contrast, and a 110-degree viewing angle. Together these deliver a quality viewing experience.

The 3K screen gives superb definition, with the highest clarity images. The backlight and precision contrast allow for a more dynamic image, but can also reveal hidden details in black and white regions.

The unit comes with built-in headphones from AKG, themselves featuring a 360-degree spatial surround sound environment.

The intuitive controls give players 6 degrees of freedom, so you should be able to traverse VR environments with little-to-no inhibition. However, if the controllers are out of sight of the headset, then their tracking will stop – put them behind your head, and their functionality ceases. 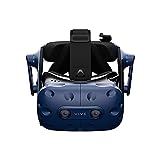 HTC entered the VR headset market with the HTC Vive, which received commendations and criticism from players. However, the HTC Vive Pro comes with even better features. It has a better resolution of 2,880 x 1,600 pixels and 615 PPI.

Although it still uses a cord, it is smaller compared to the original HTC Vive. The display is high-quality, and the screen-door effect is very minimal. As for the headphones, they sound balanced and are capable of 3D spatial audio.

HTC introduced a new harness in the VR headset, which holds it firmer but in a comfortable way. In addition, it comes with first-generation trackers and controllers, which are not too bad but can surely be improved. However, they do have good motion tracking.

One thing you should note about the HTC Vive Pro VR headset is that it is quite demanding. Thus, you may need to upgrade your PC to enjoy a smoother experience using it. It works on both windows and the StreamVR platform.

As for the price, it is a bit on the high side. But if you don’t mind that and have a high-end PC, it is a good VR headset to have. It comes with DisplayPort 1.2, USB-C 3.0, and Bluetooth connectivity.