The answer is, almost certainly, yes.

The vast expanse of space is something you’re going to want to experience with VR. Moving almost freely in any angle, setting off along any path uninhibited by gravity is the ideal Elite Dangerous experience.

Sadly, VR can’t do anything about gravity, but it can give you the expanse of space. Once you’ve got the best VR headset for Elite, you’ll have an immersive interstellar flight simulator.

The first thing we should point out about the Oculus Quest 2 is its cost. Compared to the other headsets in this round-up, it is a lot cheaper. They’re all a lot more expensive than this all-white, stylish headset.

The second thing is that the Quest 2 can be used as a standalone VR headset, so you don’t need the PC. This is great if you want to take a break from playing Elite Dangerous and instead want to use the library of Quest games.

When it comes to tech, the Quest has two wireless touch controllers, in-built 3D positional speakers for immersive surround sound, and more than 50% greater pixel density than the original Quest.

Whilst the HTC Vive Cosmos is the most expensive Elite Dangerous VR headset on our list, it has the internals and specs to justify that price point.

The first standout feature of the Vive Cosmos is its external tracking. It comes two Lighthouse tracking base stations (version 1.0) which give 160 square feet of externally tracked and navigable space.

This gives you more accuracy when you’re moving, especially if you add additional Lighthouse sensors, and it reduces latency significantly, which reduces the potential of nausea.

The second noteworthy feature is the Vive’s resolution. The system boasts a combined resolution of 2880 x 1700 pixels density, which is more than a three-quarter increase over the previous Vive model.

One downside of the HTC Vive is that it’s a higher-end system that requires a high-end PC to work to full capacity. If you’ve not got a great gaming rig, then we suggest a different model. But, if your rig is up to scratch, you should certainly consider an Elite Dangerous VR headset that matches. 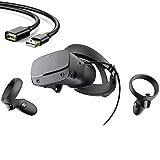 Where does the Rift stand in our round-up? Well, it’s the mid-price option, so it’s affordable but not the cheapest. It has some great features that set it apart from the Quest, but also some that lag behind.

Second, the Rift works only with a PC and cannot be used as a standalone device. This means if you’re sick of being tethered, you can’t do anything about it.

Nevertheless, the Rift S is a solid device that will give you a fully immersive VR Elite Dangerous experience. It has 6 degrees of freedom, so you can move in all directions without hindrance.

The real prize, however, is that Rift games store/library. Because it uses the PC store, the library is much bigger. This is a great advantage if you want to play games other than Elite Dangerous.

The HP Reverb G2 is the second most expensive item in our round-up, but it’s also got the ability to perform at the higher end. Like the Quest 2, the HP Reverb G2 is great value for money – it just costs more of it.

The Reverb 2 has an impressive resolution that delivers crystal clear images. The per eye pixel density is 2160×2160. In addition to this, the system uses an RGB stripe LCD, whereas many of its mid-range competitors don’t – e.g. the Vive pro.

What this means is that the screen has 3 times as many sub-pixels as standard, which in turn makes for a much sharper image.

Alongside this the Reverb G2 has a refresh rate of 90hz, so you’re not going to get any ghosting or lag.

One downside is that the headset uses a four-camera internal tracking system. This is good because it gives you infinite space to navigate, but the accuracy and latency are lower than other systems pushing in the higher end.

If raging around the cosmos trying to assassinate, rob, or mine is growing tired, then you may want to try some alternative games: